This article will discuss the rates, causes , #1 prevention, and age, breed and sex predilection of mammary tumors in dogs. 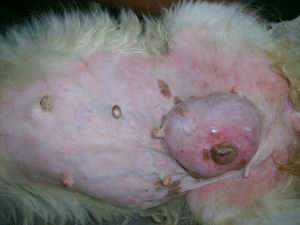 Mammary cancer is the second most common cancer overall. It is estimated that it affects 160 of every 100,000 dogs per year, which translates to over 118,000 dogs annually.

The risk for developing benign mammary tumors has been linked to the female reproductive hormone progesterone. Progesterone is the hormone responsible for the progression of pregnancy. Spaying significantly decreases the risk of developing these tumors.

Every dog owner should know about the various types of cancer. Our new dog cancer book gives you all the details.